Get Answers. Move Forward. 504-680-4100
Menu
Menu
Close Menu
HomeLibraryMaritime LawWhat Is A 905(b) Claim? How Can It Help Me Get Compensation For My LHWCA Injury?

What Is A 905(b) Claim? How Can It Help Me Get Compensation For My LHWCA Injury?

If you are a longshoreman or dockworker and you are injured while at work on or near the water, under maritime law your medical expenses will usually be covered by a 905(b) claim under the Longshore and Harbor Workers’ Compensation Act (LHWCA).  You will also receive a portion of your wages while you are unable to work. However, this amount is marginal.  After a serious on-the-job injury, you may be left with substantial expenses that are not covered.  And, in general, the LHWCA does not allow recovery for pain and suffering, lost fringe benefits, lost earning capacity and other damages. But, there are exceptions.

A 905(b) claim is a third-party injury claim that longshoremen can file against vessel owners if their injury was caused in part by the vessel’s negligence. “905(b)” specifically refers to an amendment in the Longshore and Harbor Workers’ Compensation Act (LHWCA) that provides an exception for longshoremen to file directly against an employer or owner. Otherwise, longshoremen are not able to file against employers and, instead, are limited to filing a type of maritime workers comp claim. 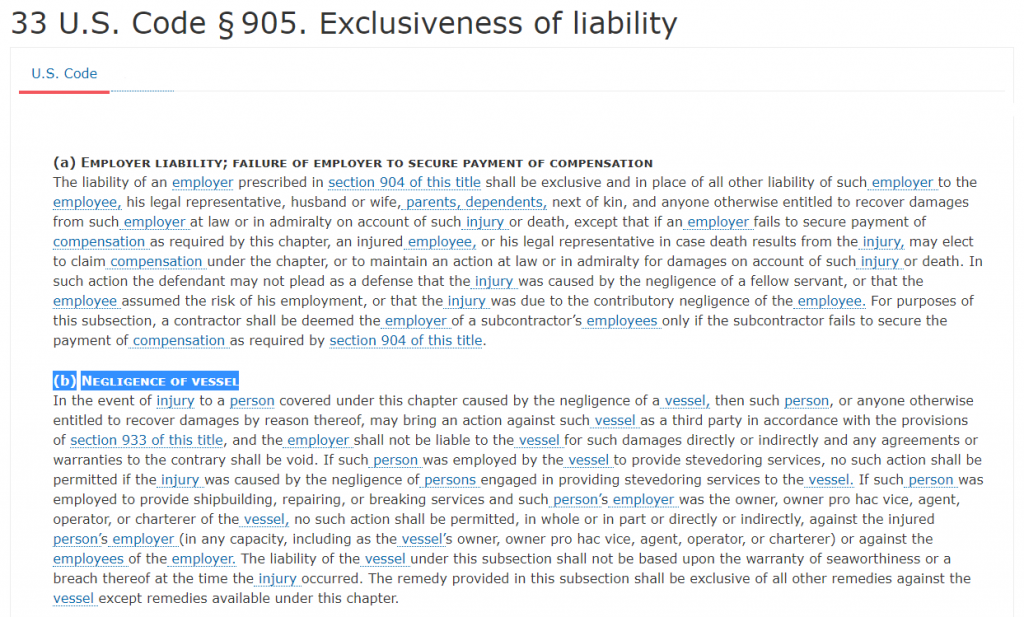 While the LHWCA provides protects the employer from traditional lawsuits filed by employees, section 905(b) of the LHWCA allows you to file a “third-party claim” against any third-party company that may be responsible in whole or in part for your accident.

You may pursue a traditional lawsuit against that third party in court and you may collect full damages for your injury, including pain and suffering, medical expenses, lost wages, lost earning capacity, lost fringe benefits and other losses.  The percentage of the damages that are covered is limited to a percentage of the blame that the third-party holds for your injury.

Section 905(b) of the LHWCA offers one exception to the rule forbidding an employee from suing his employer.  An employee may file a traditional tort lawsuit against his employer “in its capacity as a vessel owner” if both of the following are true:

In 1972, legislators made changes to the LHWCA that have proved advantageous for maritime workers. The LHWCA amendments, as detailed in section 905(b), allows injured longshoremen to file an action against a shipowner if the owner was negligent. This form of legal recourse provides injured workers with an additional means of seeking compensation for damages after they are injured on the job.

Prior to 1972, when longshore workers were injured on the job, they could seek only the recompense – medical benefits and disability – that the LHWCA allows. However, with the amendments and the reinstatement of section 905(b), longshore workers now have the opportunity to obtain a settlement award via a third-party claim.

In order for a shipowner to be liable for a worker’s damages under a 905(b) claim, the shipowner must be considered negligent under the law. Injured workers who fall under the LHWCA can file a 905(b) claim if they can prove the following four elements:

Bringing a claim is actually much more complicated than it seems at first glance. The legal nitty-gritty, poorly defined standards of care for ship owners and hordes of red tape exacerbate matters. The claims also can be tough because employers are normally immune from lawsuits brought from workers; 905(b) only allows for a narrow window of opportunity for longshore workers.

In fact, under 905(b), there are only three scenarios in which a shipowner can be liable for a worker’s damages, which include:

Given the complex nature of these cases, speak with a maritime attorney to determine your eligibility.

If you do qualify for a 905(b) claim, you can collect damages such as:

To discuss your accident and opportunities for compensation, contact our maritime lawyers at The Young Firm to set up a free, no-obligation case evaluation – 504-680-4100.