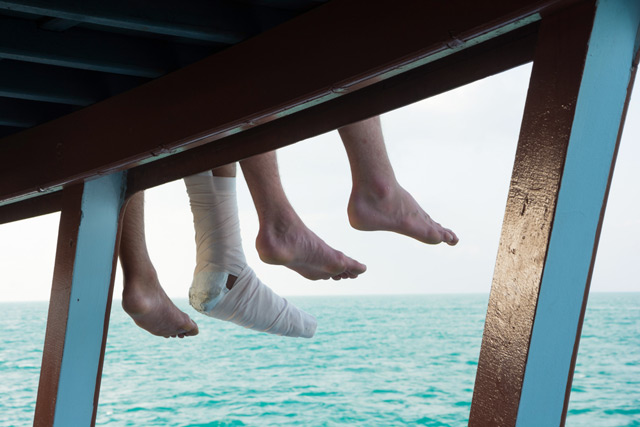 Hurt on a cruise ship? Cruise ships are legally responsible for passenger safety

Cruise ships are meant to float us away from stresses of our everyday lives.  They magically transport us and thousands of others to beautiful destinations.  And on the way, cruises offer everything from rock walls and swimming pools to spas and night clubs.   They are floating cities designed for fun and relaxation.
Cruise ship vacations have always been a popular way to travel, see the world and relax. And in recent decades, their business has exploded. With millions of passengers buying tickets, thousands of employees, and ships being built that will house over 3000, the number of injuries has also increased.
While there is an almost endless list of mishaps that can happen onboard a cruise ship, here are a few of the more common:

Whether you are a passenger or worker, when an injury occurs at sea, what rights can you expect? The answer to this question is not easy. Here are some general truths:

So, what if you are injured on a cruise ship? Who is liable for your injuries? You may file suit against:

You must be careful about your rights. Once you step onboard a cruise ship, your legal options are not the same as they are on US soil. There are a few reasons for this:

From this point, the waters get much murkier when it comes to a cruise ship lawsuit. There are enough variables in the law from this point onward, that it is a good idea to get some professional legal help to exercise your rights fully.

Whether you are on a cruise ship for work or pleasure, these safety tips provided by a Jones Act attorney can help you avoid injury.

If you are injured on a cruise ship, you may have rights to compensation under the Jones Act. Contact an attorney as soon as you make it back to land to learn about your options for legal action.

Fortunately, cruise ships are regulated by maritime law and must follow regulations designed to protect the safety, security and health of passengers.  If you are injured on a cruise ship, alert the crew and see a doctor right away.  You should request copies of the incident report and all medical reports.

If the ship is more than three miles out to sea, cruise ship passengers are also protected under maritime law.  But, there are limitations.  Often, liability is limited to a very short time period following a cruise.   Because the laws at sea are different from those on land, they require a lawyer with expertise in maritime law.

In 2010, President Obama signed into law the Cruise Vessel Security and Safety Act of 2010. This new law, which is supported by the Cruise Lines International Association (CLIA), defines new standards for the safety and security of American citizens sailing as cruise ship passengers in and out of U.S. waters.  The law requires that large cruise vessels carrying American citizens adopt basic crime reporting, safety, and security measures that are similar to those used by the American hotel industry.

These new safety measures include:

Cruise vessels that violate these laws are liable for civil and criminal penalties, including denial of entry into American waters.

Royal Caribbean Monarch of the Seas

In September 2005, the Monarch of the Seas was docked at the Port of Los Angeles.  There were more than more than 3,400 passengers and crew aboard the ship.

Cruise ships have permanent ballast tanks onboard the ship. These tanks contain a mixture of gray water, pulper water and seawater.  The combination creates hydrogen sulfide, a colorless, deadly gas. Within the first few minutes, the gas has the odor of rotten eggs; then the person inhaling the gas smells nothing. Prolonged exposure can cause severe brain and lung damage and even death.

To prevent injury, ballast tanks and related equipment must be regularly maintained.  However, despite a history of continued problems which killed a worker, Royal Caribbean Cruises continued to operate the cruise ship.

The maritime lawsuit alleges that because of inadequate maintenance, the noxious gas was sucked back into the vessel and into the passenger areas including cabins, through the air conditioning intakes. Numerous passengers and others complained about a foul smelling gas. When the workers assigned to fix the piping opened the tank, lethal hydrogen sulfide gas escaped in a huge cloud killing three crewmembers.

Royal Caribbean is accused of negligence for the death of the crewmembers and for endangering passengers.

After a month-long outbreak of stomach illness, the Celebrity Mercury set sail from its homeport of Charleston and is travelling through the Gulf of Mexico on its way to the Caribbean.

The 1,870 passenger cruise ship had been plagued with three consecutive outbreaks of the norovirus among its passengers. Norovirus is a highly contagious, non-fatal stomach illness that causes nausea, diarrhea and vomiting. Unfortunately for the victims, these symptoms make a trip memorable in the wrong way.

The last voyage of the Mercury ended early after 406 or 22% of the passengers on the ship reported gastrointestinal symptoms. The U.S. Centers for Disease Control issued a rare “no sail” recommendation for the ship. This is the largest outbreak of the virus recorded on a cruise ship.

Celebrity Cruise Lines believes that passengers are bringing the disease on board the ship. South Carolina has experience a higher than normal number of norovirus cases.

The ship has undergone a top-to-bottom deep cleaning and disinfecting. Cruise company representatives say it is now safe for passengers to sail.
Carnival Cruise Sexual Assault

ABC News recently reported a story about the 2009 rape of a 14-year-old girl by a Carnival Cruise employee. The girl and her family were on an 8-day Caribbean cruise.  One night, the girl was unable to sleep and went to the upper deck to write in her journal.  An employee pilled the girl into a employee-only lounge and raped her. The girl did not want to ruin the family vacation and did not report the incident to her parents until months after she returned home.

This was not an isolated incident.  Sexual crimes are the most common crimes reported on cruise ships, and the majority of crimes are committed by crew members.

Most people don’t think about crime when they go on a cruise.  They worry about the ship sinking or losing a passport in a foreign country.   Passengers believe they are safe while aboard a cruise ship.  The party atmosphere makes it difficult to believe that real dangers exist.

The family of the 14-year-old passenger reported the rape to Carnival, but the crew member had returned to his home country of Indonesia. Nine months later, he was working on another Carnival cruise ship and was arrested by the FBI and is serving a 3 year prison term.  The family has sued Carnival for sexual assault committed by a crew member.

Until recently, cruise ship crimes were not tracked and ships were not required to report crimes against cruise ship passengers.  In July 2010, the Cruise Vessel Security and Safety Act was passed and became law.  Now cruise ships are required to report all allegations of crimes to the U.S. Coast Guard and to the FBI.  They must also install surveillance cameras and keep rape kits on board in case of sexual assault.   However, it is important to remember that in many cases, ships are registered in foreign countries and are not subject to U.S. laws.

Cruise ships are required to screen their employees in order to ensure passenger safety.  If you have been injured on a cruise ship or assaulted by a crew member on a cruise ship, you have rights under maritime law.  To learn more, contact The Young Firm Louisiana to schedule a free consultation with a maritime law attorneys, 866-666-5129.